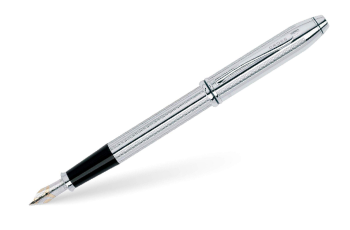 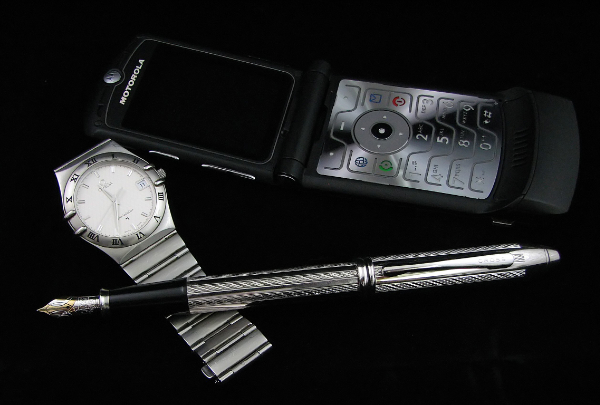 The Cross Townsend Platinum fountain pen was the first nice, new, fountain pen I purchased. I started off collecting old pens that I found at antique and junk stores such as the Esterbrook J. While I enjoyed the hunt for these pens I also wanted something nice and new, so I went to the closest Paradise Pens store (which is sadly out of business) and looked around.

I wanted something nice, something blingy, and something that wouldn’t break the bank. There were plenty of really expensive pens that were amazing but I wanted something I didn’t have to sell my car to get. Looking through the cases I saw the Cross Townsend Platinum pens including the fountain, Cross ballpoint pen, and Cross rollerball pen and they looked really nice. It was nice seeing the whole Cross pen set sitting in one place. This was great because Cross pen prices were in line with what I wanted to spend.

The old Cross pens my parents and grandparents had were skinny little things, and I did not want that. The Cross Townsend Platinum was considerably thicker, and heavier than they Cross pens I grew up with. The weight didn’t bother me too much since I removed the cap to write anyway, and that massively reduced the weight. 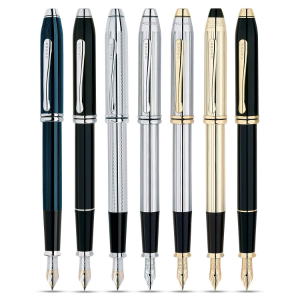 The Cross Townsend Platinum is just the platinum-plated version of their standard Townsend line and as such as quite a following it seems. They are cartridge/converter pens meaning they can use the standard Cross ink cartridges as well as coming with a converter that allows you to use standard bottled ink. You just unscrew the section (the area of the pen that you hold with your fingers right above the nib) from the barrel and insert the converter or cartridge, then off you go.

I have used an awful lot of fountain pens since I bought this Cross Townsend Platinum, so how does it stack up? Pretty darn well actually.

Writing unposted is pretty good. The barrel is long enough that it fits comfortably in your hand without the cap. The platinum plating gives it enough heft that you really don’t need the cap posted for balance. Funny enough this isn’t specific to the Cross Townsend Platinum, other Townsend series fountain pens have very heavy caps as well.

Posted it is a little top-heavy however the cap fits down on the barrel far enough that it really isn’t noticeable unless you are looking for it or you are writing more than a page or so. I can do quite a bit of writing before the weight becomes a factor. Although I love writing posted, probably just because I like the look or it is what I am used to, this is one pen I do not tend to use posted.

I purchased a fine point and it writes pretty fine. For an inexpensive (the Cross Townsend Platinum and the entire Cross Townsend line are very inexpensive for what they are) pen it writes remarkably well. Ink flows smoothly as the nib glides across the page with very little effort. I have a hard time finding any faults with the filling system or the wonderful dual-toned (gold on platinum) nib.

One thing I was not expecting to find in a modern inexpensive pen was the amount of give in the nib. No, it is not flex or semi-flex, or even semi-semi-flex, but it is not a nail either like so many other modern fountain pens. They have given the Cross Townsend Platinum a nib that has a little cushion in it, just enough to make it a pleasure to write with.

As for the filling system, the Cross converter is wonderful. I have used it for a wide array of inks like my favorite Noodler’s ink and it seems fine. The Cross cartridges are a little of a different story, however. Honestly, they are not bad, I have just had a hard time getting them started and writing reliably unless you clean the heck out of the pen before you use one. That really does not detract from the pen as far as I am concerned because I tend to use the converter on all my cartridge/converter pens.

One thing I really like about the Cross Townsend Platinum pen is the fact that it has a plastic section as you can see in the image above. I don’t have a problem with metal pens but metal sections tend to be too cold, impersonal, and slippery for me. That is probably why over the years I have amassed quite a collection of pens, and can not think of a single one with a metal section (although I probably do have one or two somewhere).

This section is not only a nice, warm, plastic, but it is also black which offsets the platinum of the pen, and dual-toned nib very well. Whoever designed the Cross Townsend Platinum series at Cross seems to not only have an eye for good looking pens, but also actually writes with them.

The clip on the cap is also substantial, not some little flimsy thing you are scared to snap off. This also prevents the pen from rolling off your desk very well unless you are in an earthquake. You know how some clips will stop the pen from starting to roll, but if they get started on a good incline they just hop right over the clip? This isn’t one of those, you will have to get enough of an incline to make the pen slide or so much angle that nothing will stay put.

Many years later I still love this pen. No, I do not use it as much as I probably should simply because I am more likely to reach for a Dani Trio Urushi, Montblanc EA Poe, or Pilot Vanishing Point than this one. That isn’t because there is anything wrong with the Cross Townsend Platinum, it is just I have more exciting pens now.

I am very happy I bought the pen and think it, or the Cross Townsend Platinum ballpoint would make an excellent graduation, wedding, or retirement gift. At only a tad over $200 for the fountain pen and about $40 less for the ballpoint, it is affordable enough to give the set.

I hope you enjoyed my review of the Cross Townsend Platinum Fountain Pen!