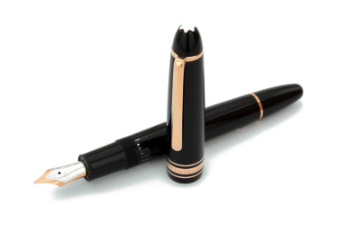 I have to let you in on a little secret, I love the style of a lot of Montblanc pens and the Montblanc Meisterstuck 146 LeGrand fountain pen is not only the pen that started it all for me, but it is also to this day my absolute favorite modern high-end utilitarian fountain pen. Let me explain why.

I need to start by explaining that rather long and weird category I gave it; modern high-end utilitarian fountain pen. While it sounds like a bunch of words I just strung together for the heck of it, in the Montblanc Meisterstuck 146’s case, it isn’t.

It is modern because you can go to the store and buy a Montblanc Meisterstuck 146 just manufactured and the vast majority of them you see will be from the 1980s on up. They were however first manufactured in the 1940s so it is possible, however unlikely, you could get one that is considered vintage. Most collectors I know of if they go back that far they tend to skip over the early 146s and go straight for the 136, as I did, and what a pen that is……. some other time.

It is high-end because if you know one hundred people, 99 of them will gasp and call you nuts when you tell them you paid just under $500 for a pen made mostly from plastic. The last one will have a stroke. Any fountain pen is a luxury, and any pen over about $200 will make people stop and stare, hit the $500 range and you are indeed high-end for most of us. Not to mention some think the Montblanc Meisterstuck 146 is just about the name Montblanc, again, not true.

I classify the pen as utilitarian because it is not flashy but instead is designed to be an excellent tool to write with, which of course is practically the literal definition of the word utilitarian.

And of course, it is a fountain pen. Put all that together and you have my definition of the Montblanc Meisterstuck 146 LeGrand fountain pen.

What attracted me to the Montblanc Meisterstuck 146 in the first place is its simplicity. The pen is almost all black, a white star on the top of the cap, gold (or silver) clip and cap band, and of course the dual-tone gold and silver nib. There are many variants of the 146 made out of many different materials so I want to be clear, I am talking about the plain, generic, non-descript 146, not any of its special variants.

The design just screamed: “I am the king of writing, you are not worthy”. Yes, that last bit was because it was in a Montblanc store and they seemed a little snooty. The staff in a Montblanc store all wear nicely pressed suits and wear white cotton gloves so as to not actually leave fingerprints on things. Really? It’s a pen! It is meant to be held for Pete’s sake!

In all fairness, once I got past the air of snootiness that wafted out of the door to the Montblanc store I found a lot of them to be really nice people who were just as into the pen scene as I was, just working somewhere that had some really strict rules. Most of them actually carried and used either Montblanc Meisterstuck 146s or similar Montblanc Meisterstuck models. But I digress.

Once I was actually able to get a Montblanc Meisterstuck 146 in my hand and start writing with it, I was in love. The diameter of the section (the area right above the nib where you hold it to write) was perfect and it had a little area where your fingers just melted into the plastic. Speaking of the plastic….er….precious resin I mean (yes, they call the plastic “precious resin”, did I mention snooty?), whatever it is it is very nice as it warms to the touch just right and never seems to get slick. One thing I hate about a lot of modern pens is the metal sections which not only are cold when you first grab them but seem hard and slick. The 146 does not have those issues.

Once you start writing with the Montblanc Meisterstuck 146 you realize this pen was designed for someone who actually writes. This is not a check signing and put it away pen, not a pen to check off your grocery list, this is a pen to sit down and write a letter to someone, or a pen to start writing that novel. Yes, that kind of pen. A pen that makes you want to write. I love that.

Maybe it’s me, but I fill up my Montblanc Meisterstuck 146 LeGrand and I immediately look for things to write. Yes, I could type that list on the computer in half the time, or tap it into my phone so I have it with me all the time, don’t care, write it.

Part of that, of course, is how the Montblanc Meisterstuck 146 strikes you visually, part of it is how it feels in your hand, but what we haven’t talked about is the part about how it actually writes.

I have used both a medium and fine Montblanc Meisterstuck 146 and both have smooth even flowing nibs. I really like my fine but I can tell that the medium is just a tad bit smoother. I have threatened to send off the fine and see if a pro could smooth it even more but in reality that is being super picky. I would never consider it if we were not talking about a pen I love to do a lot of writing with, and even then it is really excessive to talk about smoothing it.

The Montblanc Meisterstuck 146 LeGrand is a piston filler which means you dip the nib into a bottle of ink and using the cap on the back of the pen barrel turns it to activate a piston inside the pen to draw in ink. Turning one direction screws the piston down and expels air which turning it the other direction moves the piston back up away from the nib sucking in ink from the bottle. The chamber inside the pen holds plenty of ink for a day full of serious writing or weeks of occasional writing.

Leaving the pen uncapped on the desk for a few minutes while collecting your thoughts does not tend to dry the pen out too much and it starts back up pretty quickly. The fine tends to dry out faster as you would expect than the medium but even then, it takes a couple of minutes.

Of course, it works well with Montblanc ink, and also with virtually every other ink I have tried. Do keep in mind that I only use good, name brand ink in my pens such as from a well-known pen manufacturer, Noodlers, or Aurora. My favorite ink in my Montblanc Meisterstuck 146, of course, is Montblanc’s old iron gall Blue Black which is no longer made. For something very close try Diamine Ink Registrars Bottled Ink 100ml – Blue/Black which is also an iron gall based ink.

Is the Montblanc Meisterstuck 146 worth almost $500? To me, absolutely. To you? Maybe and maybe not. It depends on what you want from a pen. I have several variants of the 146 in different materials and some special editions such as the Ramses II so I am probably not the person to ask about it being worth the money.

In the end, if you want a really nice pen for writing that can not only last your lifetime but also be passed down generations, or need a really special gift for that special writer in your life, there are few gifts as special as the Montblanc Meisterstuck 146 LeGrand fountain pen.