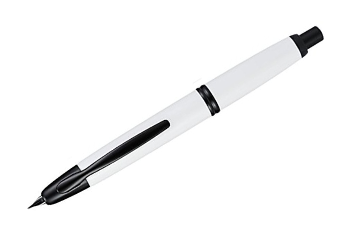 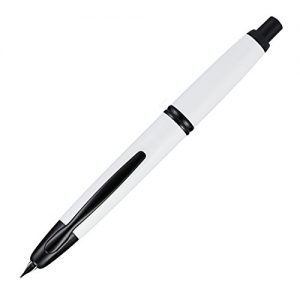 The Namiki Pilot Vanishing Point Fountain Pen is a retractable nib fountain pen sometimes referred to just as a VP. This means that you click the button on the top of the pen just like a lot of cheap ballpoints, and it extends and retracts the nib of the pen, much like the ballpoints extend and retract the ballpoint portion of the pen.

When the pilot vanishing point is retracted, the opening where the nib went in is covered by a little door, preventing debris from falling in the opening and settling on the nib. This also helps keep the nib from drying out since there is no cap to speak of.

When you first pick up the pilot vanishing point you notice it is a fairly heavy and substantial pen for its size. While I honestly have not done extremely long writing sessions with the VP (say over a couple of pages), I have not noticed any hand cramps or fatigue.

This is particularly interesting considering the fact that you can not hold the pilot vanishing point like you do other pens, the pocket clip goes between your fingers towards the page instead of back on the rear of the pen as you write. This does take a few seconds to acclimate to but once you have written a few sentences it really is not that big of a deal. In fact, once you have been using one for a while you really do not even notice it.

This rather unusual way of holding the pen could be troublesome for people who hold their pen in an unconventional way such as wrapping a finger all the way around the section. If you use what most people think is a non-standard pen grip I would suggest you try one of these before you buy it.

I would say that the pilot vanishing point is a little thicker in the middle than it has to be although this might help with the ergonomics of holding it. It seems they could make the pen a little more streamlined, and I would be interested to try that out.

These pens come in extra fine through broad with the most common of course being fine and medium. I find that there is more of a gap between the fine and medium than with many other pens I own. This means that at least for me the fine is a tad to fine and hence a little scratchy while the medium is a little wide for what I consider a note-taking pen.

All of this is being pretty picky as the pilot vanishing point writes very well. One of the extremely redeeming features of the pen is that they do not dry out nearly as bad as some other pens I have used. Retracted it can sit on my desk unused for weeks and then start right up which is a really big bonus for a pen primary aimed at taking notes. It also takes a while to dry out when the nib is extended which comes in handy when you are sitting there listening to a lecture of thinking of the next item to put on the list.

The pilot vanishing point is a cartridge converter pen so it can use fairly large Pilot ink cartridges or be filled from a bottle using a very nice plug-in converter. Personally I prefer the converter as I get to choose from a much wider array of inks that way. I have used the cartridges and they work as well as any and seem to last a tad longer than most. The Pilot ink in the cartridges seems to be of fairly high quality if a little boring.

A great thing about the pilot vanishing points is that they come in a wide array of colors, and I mean wide. They have white, black, blue, yellow, red, and on and on. You will even find special editions such as the mustard which was my first VP and my latest VP which is nicknamed the Storm Trooper, yes, it is white with black trim. There are even a few with radien finishes.

So how does the pilot vanishing point pen actually write? At first, I thought the VP was more gimmick than a real pen. Wild colors, a retractable nib, how good could it actually be? The answer is, pretty dang good. I should have known that simply because it is a Pilot fountain pen after all, live and learn.

I would love to try the broad sometime but I have never actually seen one in the wild and a nib that wide just makes no sense for a pen aimed at note-takers.

So what is this vanishing point pen really good at? Carrying in a shirt or jacket pocket or leaving somewhere that you tend to scribble notes a lot (next to a phone at work comes to mind). It is a little pricey as a pen to gift to someone as a first fountain pen although it would fit that role very well. I can certainly see this breaking the mold of what the typical person thinks a fountain pen is.

Overall I really like my pilot vanishing points, or I would not have bought the second one. They are not pens I use all the time, and they are not pens I grab when I want to “enjoy the art and relaxation of writing”, they are more utilitarian than that. These are the pens I load and take with me when I know I will be taking notes and I need something fast, easy, and reliable.

I hope you enjoyed my review of the Namiki Pilot Vanishing Point Fountain Pen!