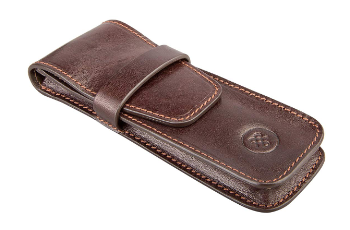 Looking for the best pen cases to carry your pens in usually starts because you have some nice pens and you are tired of the cheap cases that do little to protect your pens, look just as cheap as they were, and start to fall apart fairly quickly. You have decided it is time to invest in a nice case that will be with you for as long as you decide to carry pens, which hopefully is a very large number of years. 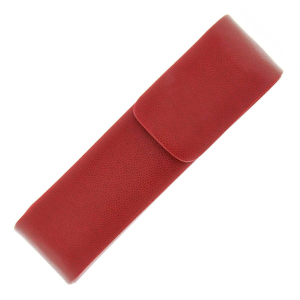 For those who just want something passable to get them through this month, I present the Laban Double Fountain Pen Case. This case is that cheap pen case you see at the pen shows, in pen stores, and is carried by a lot of online pen dealers. They don’t carry it because it is some awesome case, it isn’t, they carry it because it is a good bang for the buck case that has fairly consistent quality from case to case.

Yeah, I am kinda badmouthing it, but really for a sub $20 case it is pretty nice. One of the best pen cases to carry your pens? For the price, sure. But if you use it, expect to be replacing it sooner rather than later. 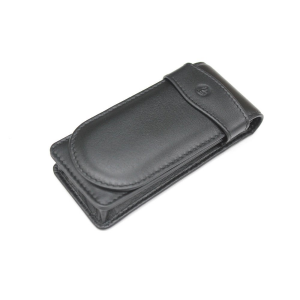 Now let’s take a step up to the Pelikan Fine Leather Black Triple Pen Pouch which is made by the same Pelikan that makes the legendary Souveran series of pens. In fact, just like their pens, these cases overdeliver in just about every way possible.

These real leather cases are soft to the touch yet seem like they would be very durable over the long term. While some people have reported a strange smell, probably from cleaning solutions, I have not had that experience. The case comes in 1, 2, or 3 pen carrying capacities.

Plenty of room in this case to fit a Pelikan M1000 or Montblanc 149 sized pen and since the flap simply slips under the hoop it will go down in size to fit much smaller like the Pelikan M400 or Montblanc 145 pens just as well. This truly is one of the best pen cases to carry your pen in at any price point. 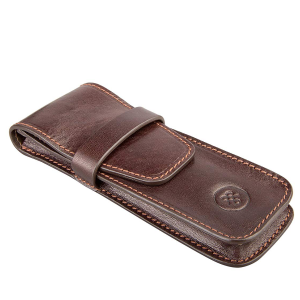 Now if you want to splurge and get basically the previous Pelikan case in nicer leather (or in brown), try the Maxwell Scott Full Grain Leather Pen Case. This case is about 50% more expensive but once you hold it in your hand, you get why. The leather is just amazing. Not saying the leather in the Pelikan is bad or sub-standard, it isn’t, but this is the next level in one of the best pen cases to carry your pens in.

Handmade in Italy these come in either black or brown and will hold three thin pens, or two larger fountain pens easily. I love the brown with the slightly lighter stitching, really nice touch.

My only complaint here is that there is no divider between pens which of course is being pretty picky. The pens I carry are not ornate enough to cause damage to the pen next to it, and the lack of divider allows me to carry one really large (some Krones maybe, way bigger than a M1000 or 149), two typical pens for me like a M800 and a 146, or three small pens like Parker jotters. So I guess what I am saying is, I am used to having dividers but the lack of a divider is actually a plus. 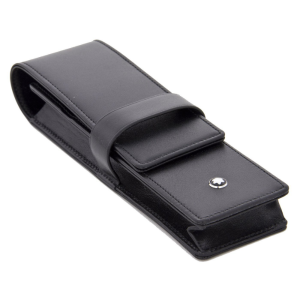 Next up is a case I constantly hear mixed reviews about, the Montblanc Meisterstuck Siena pen case. These come in black, or black, and in 1, 2, and 3 pen capacities and runs a little over $100 for the two pen version. Yes, the repeated color was a joke.

So why the mixed reviews? First, some people just seem to hate Montblanc for whatever reason. Second, and most importantly is that these are hard leather cases.

Most people are familiar with soft supple leather, that’s what most pen cases are made out of, most jackets, purses, etc. Some of the leather in some purses and bags can be a little stiff, but even that usually pales compared to the leather Montblanc uses in their Siena pen cases. Think very thick and stiff plastic and that gives you an idea.

That being said, the leather is absolutely flawless, the stitching is perfect, everything is exact, and of course, even the largest standard Montblanc pens (149) fit perfectly. I also like the fact that it is divided into slots to keep your high end pens from scratching each other.

Even I was initially turned off by the feel of the leather. Then I thought about it. What happens when I have a Pelikan pen case with $1,000 worth of pens in it in my briefcase and I throw my 12″ tablet in there on top of them, let’s just say that could be very bad. What if I did the same thing with my pens in this Montblanc Siena case? No problem at all.

Funny, you buy a pen case to protect your pens then gripe because the leather protecting your pen is too protective?

So I bought the three pen version and actually used it, awesome sauce. It turns out this is my favorite pen case because it is simple, elegant, durable, protective, doesn’t show fingerprints, and will probably outlive me. Worth it? Oh heck yes. This isn’t one of the best pen cases to carry your pens, this is the best. 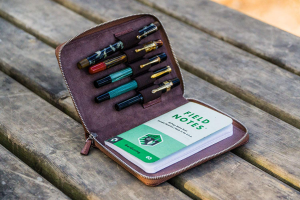 So now I want to go for something a little different, the Galen Leather Zippered 5 Slots Pen Case. This is different for two main reasons; first that it holds five pens, and second that it also holds an A6 note pad. It is also designed more like a book or binder than the rest of our cases.

While I personally have a Meisterstück medium notebook, not everyone wants to spend that kind of money, and you don’t want to take something that expensive out in the woods, or anywhere it might get hurt. That’s where this case comes in.

The quality is extremely good for the money with nice soft leather which doesn’t feel too thin, a nice soft interior to protect your pens and a really nice zipper that feels like it should be on something far more expensive. Every time I grab this thing I think I should have paid more for it, but I am glad I didn’t.

So far it has weathered everything I have thrown at it. One thing that always concerned me about carrying my Montblanc notebook was sitting it down on surfaces like the top of a brick wall, or the sidewalk while I sit on the curb talking to someone. I have no such qualms about this product and although there certainly are some scuffs and scrapes, it just gives it more character.

My only real concern is I am not a big fan of elastic loops for holding pens. They either wear out, stretch out, or they may contain chemicals from the manufacturing process that can discolor your pen barrels. So far I have not had any issues and I keep my really expensive pens away from the elastic.

Overall this is an extremely practical and useful case and probably the best book style pencil case I have come across, especially in this price range.

I hope this article has helped you find one of the best pen cases to carry your pens.