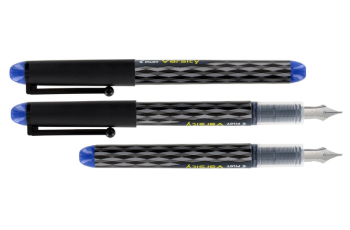 Today I want to talk about the best cheap fountain pens you can buy because too many people seem to think that fountain pens are all these expensive collector’s items that no one actually uses. This list is also perfectly good as the best fountain pen for beginners list. While there certainly are pens that fit into that category, fountain pens are just like cars. Yes, there are the Bugatti Veyron Super Sports (which costs more than every house on my street, both sides, combined) of the pen world, but there is also the Toyota Yaris.

Personally, when I am thinking about the best cheap fountain pens I think modern. While I love the inexpensive and reliable Esterbrook J, they cost substantially more than the other pens in this roundup and very often are in need of repairs as soon as you get them.

First on my list when I think of the best cheap fountain pens is the Pilot Varsity. These are available in fine (sometimes called small) and medium in a nice selection of colors and are good and reliable writers that can be had for under $2 each when bought in packs. 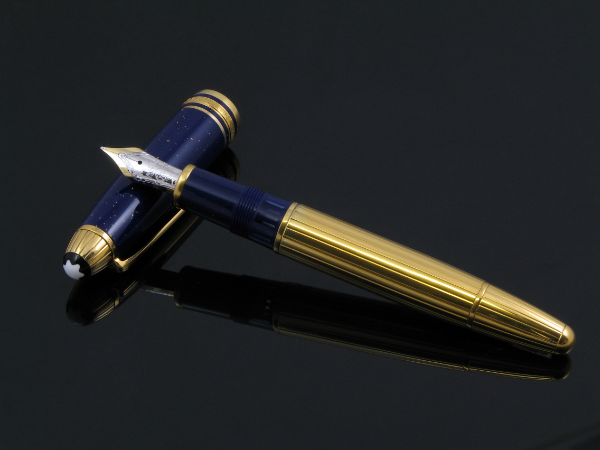 Do they write as well as my $2,000 Montblanc Ramses II? Well no. but if you do the math you get a pen that writes 75% as well (better than a Bic ballpoint ever will), is just as reliable, and you don’t worry about losing for about $1,998.20 less money. For this price, you can buy several packs and have them stashed everywhere just like most people do their ballpoints and still make a down payment on a car.

I have bought a lot of these cheap fountain pens over the years, as have many people I know, they never disappoint. 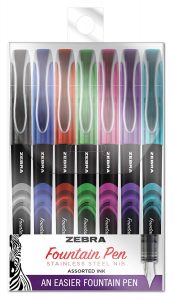 Next up for me is the Zebra Fountain Pen which for some reason seems to be one of the most common cheap fountain pens offered at many pen shows. I find this odd not because the Zebra is a poor pen, it is not, but because the Pilot Varsity is much more of a household name in fountain pen collector circles than the Zebra, and Pilot also makes a lot of really nice higher end pens in addition which I do not believe Zebra does.

But how does it stack up against the Pilot Varsity? Honestly, I have a hard time picking one over the other from a reliability or performance standpoint. I have had the Zebra seem to run out of ink or dry out so I could not use it a little more often than the Pilot but not enough to say it is a problem. I like the grip of the Zebra just a tiny bit better than the Pilot. The colors of the ink are also a little different so it gives you a little variety.

The Zebra pens are also a little more expensive but we are talking literally pennies here so take that with a grain of salt.

If I walked into an office supply store would I buy these over the Pilots? Probably not, but I have to admit that the main reason for that is because the Pilot Varsity is so popular that it is what I look for first strictly out of habit. What if I saw a display of the Zebras right at the front of the aisle? Then I would not hesitate to grab the Zebra instead of looking for the Varsity or other cheap fountain pens. 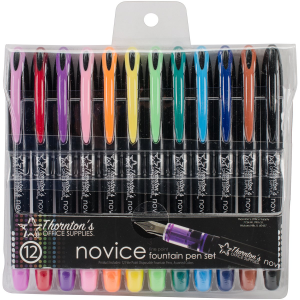 One of the really nice things about fountain pens is that for many of them you can use bottled ink and that means you have an absolutely amazing array of colors to choose from. There are probably several hundred colors currently in production, and of course many out of production and even some vintage inks are perfectly usable. Unfortunately, most of the inexpensive disposable cheap fountain pens are not made to be filled from a bottle.

The good news is that maybe you don’t need to fill a cheap fountain pen from a bottle, you can buy ones that already have the color ink you want in them. These Thronton’s Art Supply disposable fountain pens come in a 12 pack which includes 12 different colors. These are fantastic little fountain pens that write well and seem to hold a reasonable amount of ink.

I really have no complaints about these pens but I feel they are more aimed at artists (hence being from an art supply store) than daily writers. Where this becomes evident is that the ink seems more translucent than either the Pilot or Zebra. While this is fine for coloring, it is not so much for actually writing. It makes me think of painting with watercolors as opposed to acrylics.

Overall if you are more about the color than serious writing and reading what you wrote, these will do an excellent job. If however, you are a serious writer, use them for writing checks (yeah, who does that any more), or taking notes, then the Pilot or Zebra might be a better choice. 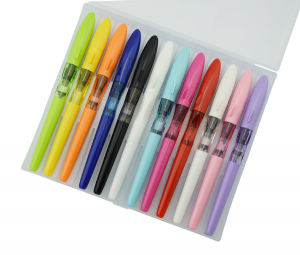 The last disposable I want to talk about is one I have not actually used but I keep getting people telling me to include them in the list, so here they are. I need to make time to order some and try them so later versions of this article may include first-hand information.

The Chinese Jinhao Shark Pens are unique in that they are quite cheap fountain pens coming in at less than $2 each in multi-packs, but do not contain any ink. Instead, they are converter fill allowing you to use any bottled ink you want. I have a lot of people telling me they love these pens for that very reason. I have heard, and see in some reviews, that some people have a hard time getting them to write but this could be more a problem with the ink they bought than a problem with the pen.

Over the years I have found that some ink is better than others and that some pens want a specific type of ink. Yes, I know that sounds crazy and if I had not seen it myself I would not have believed it. I have an Omas Paragon that will write with Omas ink and Aurora Black, but nothing else. It went back to Omas three times and went to two other high-end pen repair techs who all told me the same thing, use Omas ink. Great except Omas isn’t around anymore.

Fortunately, these pens are cheap enough that if you want to try some nice fancy ink you can try some of these. If they work, great. If they don’t, no big loss. Overall, I have to say the Jinhao fountain pen looks interesting.

Lastly, I wanted to include one cheap fountain pen that is not disposable and that costs a little more. The Parker Jotter is a stape of fountain pen users for their ballpoint pens, now, they make a fountain pen. Currently, you can get one of these for under $20 and it comes with a couple of ink cartridges to get you started.

I have never been a Parker fan personally, just not my style, but even I owned and used a vintage Parker Jotter ballpoint and now, a modern fountain pen. They write well, are very light, and if anything happens to them you are not crying about the loss. Sure, they are a lot more expensive than a Pilot Varsity, but they are reusable whereas the Varsity is not.

My only complaint about them is that they are fairly thin and I prefer a thicker pen, but as long as you are just signing your name or taking quick notes, this pen will do just fine and is an excellent cheap fountain pen.

Honorable mention goes to another iconic cheap fountain pen, the Lamy Safari. Coming in only a few dollars more than the Parker Jotter (around $20 usually), having been around a lot longer (in fountain pen form), and having as a slightly thicker body makes it a clear contender. I actually think it writes better than the Parker but that may just be me. Why didn’t it make it above the Parker? Because we went from talking about under $2 pens to now talking about a pen that costs over twice that much, I had to stop somewhere or we would be discussing thousand dollar limited editions.

The bottom line here is to try a nice disposable and see how it works for you. If you like disposable and only really use a few colors, stick with that. If you want a cheap fountain pen that you can reuse, try a Parker or Lamy. I would stay away from the Jenhao unless you really need the capability of using bottled ink in a disposable, or you can buy a converter for the Lammy and use bottled ink in it.

Good luck, and I hope you find the best cheap fountain pens that work for you!